I am reposting a piece my brother wrote for a parade service this morning. He discusses the current refugee crisis through the prism of his experience of spending two years in Eritrea, one of the countries whose regime is leading people to risk their lives in attempt to find safety elsewhere.

"Today’s collection goes to the charity “All We Can”, which used to be the Methodist Relief and Development Fund. The work done by All We Can is focused on eradicating poverty across the world. This includes supporting refugees in different parts of the world.

There has been a lot of talk in the news recently about refugees. While Syria has been the focus of most of the recent discussion because of the current unrest there. However many of the refugees come from Afghanistan and Eritrea. All three of these countries have different issues, but the common factor is that people are leaving their homelands because they have no choice.

Anyway, having lived there for two years, it made an impact on my life that I can’t describe. I met some amazing people, but it gave me a glimpse of the everyday difficulties that people in Eritrea endure and some understanding of why the second newest country in Africa is the second largest exporter of refugees to Europe. 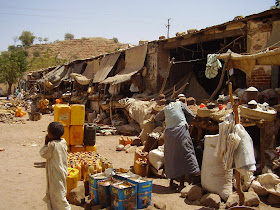 
My job as a Teacher Trainer meant that I lived in a town called Agordat and worked with teachers local teachers, providing support. Two of the teachers I worked with were Tesfeldet and Ahmed. They had young families, and lived a long way from the rest of their families. They were all in their thirties and had all been signed up to teach as part of their National Service when they left school (in reality they were the lucky ones – many were made to be soldiers). National Service in Eritrea involves doing a job that you don’t choose, in a place that is usually along way from your home town, and there is no time frame, so it goes on interminably.

Tesfeldet’s situation brought this home to me. During the summer of 2007, he and Ahmed, along with many other teachers, were picked up from their homes one day and taken to the Danakil Depression – known to be the hottest place on earth – with temperatures often over 50C. They were made to do military training, which included walking 30km a day, carrying 5 litres of water and not being allowed to drink it.

Ahmed was a skilled teacher trainer, who was extremely committed to his job, however his salary per month equated to £30 a month, which is not very much by anybody’s standards. He shared with me, when he was confident that I was not a spy, that, if he was allowed, he would like to be a farmer in his hometown, which was a two day journey away.

Another teacher, Hailab, was separated from his wife and two small children, who lived in the capital, Asmara, a 5 hour bus journey away. He was the head teacher at a Methodist School in Agordat. This was an anomaly, because most religion and organised activity is frowned upon in Eritrea (there are no scouts or similar). Groups where 5 or more people meet regularly are deemed to threaten the government as they could be politicised. There are 4 recognised religions; Islam, Orthodox Christian, Catholic and Lutheran. The Methodist Schools are tolerated as part of the school system, however any evangelising results in arrest and unlimited time in prison, which is usually a shipping container near the Danakil depression. I visited the school one day to discover that only the ladies in the school were present, the 4 male teachers (and church leaders), including Hailab, had been rounded up and taken to prison.

They had been visited by 2 boys, who were looking for shelter for the night. The boys’ families had sent the boys to escape from the country before they got rounded up like all other young people about to do Year 13 at school. The young people are rounded up before Year 13 and taken to military training school, where they do extremely harsh military training and school studies. Their end of year results determine what their national service will be – doctor, lawyer, teacher, soldier. Anyone found to have harboured or known that people have escaped from the country is imprisoned.

The authoritarian regime in Eritrea has spies everywhere and they do not tolerate anyone doing or saying the wrong thing – they listen in on phone conversations, they follow people and listen in on conversations between friends walking down the street or sitting in cafes.

I can’t tell you what Ahmed, Tesfeldet and Hailab are up to now: there is only limited, censored internet in Eritrea, and they have probably been moved on more times than I care to think about. Every time I see boats arriving from the Mediterranean or I see people being interviewed by the press, or worse still I see the body bags on the beaches, I wonder whether they reached the point of it all being too much for them. I wonder how they are managing to make ends meet in a country that is becoming increasingly isolated from the world, and where the cost of living continue to sky rocket due to lack of resources.

I think about Jesus and his message about the sheep and the goats – whenever you helped one of the least of these you did it for me. I wonder "am I doing enough to help people who have nothing through no fault of their own, but because their lives in their own countries have just become intolerable?"

I ask myself "what more could I do?"

For more information about people experiencing the situation in Calais, having fled Eritrea amongst other countries, read this post by Alison Thompson who, with her son Dan, has been taking supplies over the Channel to them: http://www.alisonmthompson.co.uk/making-friends-at-the-calais-refugee-camp
LindyB at 10:04 pm
Share